South Korean is the travel destination of every Hallyu fan. Along with its K-Pop culture, South Korea is home to some unique sights and landmarks. This Asian country is listed among the 25 most visited countries in the world. You can see a good diversity in the geography as you can see the huge mountains to the silent sea. Here we have mentioned top travel destinations of South Korea. 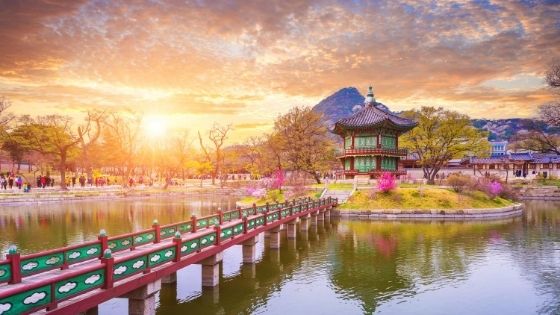 Seoul is the capital city of South Korea. Seoul is home to pop culture. You can see beautiful parks, large buildings, art galleries, and various other modern places. But Seoul is not only about chic life but also a place to historical landmarks. You can visit the National Museum and War Memorial. Some of the best key attractions in Seoul are Gyeongbokgung Palace, Changdeogung Palace, Bukchon Hanok village, Lotte World, Bukhansan National Park, and Namsan Seoul Tower.

Busan is the home to one of the largest ports in the world and largest in South Korea. If we talk about the location then Busan is the best place to visit in South Korea. The south-east coast looks damn attractive at night. The sparkling sea takes away all the tiredness of your day. You can do various activities like trekking to the green mountains. Watch the beautiful sunset at the beaches and relax in the hot springs. Don’t forget to visit the Busan Gamcheon Cultural Village also known as Santorini of South Korea. Busan is like a modern place with the correct pinch of tradition. The key attractions of Busan are Gamcheon Culture Village, Haeundae Beach, Haedong Yonggung temple, and Jagalchi fish market.

Suwon is the capital of Gyeonggi province and one of the largest cities in South Korea. Suwon is known for the Hwaseong Fortress which is a UNESCO World Heritage Site. This fort was built by King Jeongyo of the Joseon dynasty. You can visit the Korean Folk village to learn more about Korean culture. The folk village shows the traditional Korean houses and furnishings. If you are a soccer fan then don’t forget to visit the World Cup Stadium known as Big Bird, which hosted the 2002 FIFA World Cup quarter-finals.

Gyeongju is the ancient capital of the Silla Kingdom. This city has various historical sites. You can visit several UNESCO World Heritage sites in Gyeongju. Bulguksa Temple is a 1000-years old Buddhist temple and one of the famous attractions of Gyeongju.

If you love hiking or you want to take some attractive pictures then you must visit Seoraksan National Park. Seoraksan has a diverse flora and fauna, beautiful mountains, crystal clear streams, and attractive lakes.

If you have time to explore more places along with these key attractions then you can visit Andong, Jeonju, and Chuncheon.

Some Offbeat Places to Visit in Sikkim

Camping Fire Pit – Know All About Them

Is It Worth Going On The Celestyal Cruises

Different Types of Family Visas That Are Available

How to Design An Excursion to Spiti Valley...

Niagara falls, Which Side is Better US or...